When shopping for industrial electronics, knowledge of computational and networking capacities is only half the battle. It is also important to understand durability ratings and how they work. The standard you’ve likely seen is the IP rating. It is frequently used by manufacturers to show what conditions equipment has been tested to withstand.  And, it graduates from generic terms like “waterproof” to quantifiable expectations. Understanding IP ratings can help you pick the right electronics more economically, and it brings better peace of mind by establishing proper confidence in your devices.

Starting With the Basics

The Ingress Protection (IP) code is a standardized system to identify how enclosures fair against different threats of foreign objects or substances penetrating an enclosure. It was originally created by the International Electrotechnical Commission (IEC) and has since been adopted by ANSI. This makes it a global standard for electronic devices (and mechanical cases). When you understand the ratings, they will always tell you what you need to know.

The rating system itself utilizes a simple code to denote different levels of ingress protection. The system always has the letters “IP” followed by a two-digit number. The number gives information on protection from solid objects and liquids.

Understanding the different ratings supported by the IP code is straightforward. The first number references the rating against solid objects. It ranges from 0 to 6. While a 0 denotes that no testing has been done, most devices with an IP rating will start at 1 and go up. A rating of 1 tells us that the enclosure is designed to prevent objects larger than 50mm from penetrating the enclosure. For reference, this is enough to keep hands and major body parts from coming in contact with electrical components, but fingers can still get through. A rating of 2 lowers the maximum object size to 12.5mm and is a typical rating for electrical sockets. 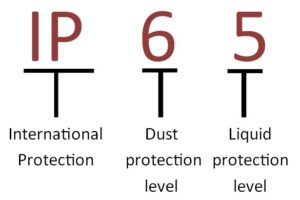 Higher numbers mean higher protection, and at 4, most small wires and insects like ants will not be able to threaten the device. At the highest level, 6, the enclosure is completely dust-proof. It is vacuum sealed and impervious to ingress from any testable solid object.

The second number references protection from water and other liquids. Like with the solid object rating, a score of 0 means the device is completely untested. At a rating of 1, the enclosure has been subjected to vertical, dripping water at a rate of 1mm per minute. To give you an idea, heavy rainfall is usually measured at 10mm to 50mm per hour (or 0.16mm to 0.83mm per minute). Keep in mind, though, that this rating does not test against angular liquid exposures such as wind-driven rain. As you go up in scale, the ratings denote protection from increasing angles of exposure. At 4, the device is protected from water at any angle but not any pressure.   At 5, it is safe in the face of water jets. The scale continues to rise; at 7 the enclosure can be completely submerged up to 1m depths. At 8, the standard begins to break down. Any enclosure rated at 8 is can safely be submerged past 1m, but the full depth varies by manufacturer. On average, 8 ratings denote safe submersion up to 3 meters, but always double check the manufacturer specifications.

Generally speaking, outdoor rated devices will start with an IP65 and go up. The Antaira APX-3200 is an example of an access point that may be placed in any outdoor location that isn’t regularly under deep water.

Now that you have a good understanding of the ratings, it’s time to apply that knowledge. In some cases, the nature of the environment surrounding devices will determine IP ratings for you. In most cases, it will be less clear, and you’ll need to weigh costs and benefits. The first point to understand is that IP ratings don’t just raise prices — they typically increase the weight of the devices.

One of the most common reasons to check IP ratings is for devices that need to perform outdoors. Almost always, a minimum solid ingress rating of 5 is needed. In arid regions, a 6 will be necessary. As for liquid ingress, the issue can be tricky. While at least some exposure to precipitation is expected, anticipating exposure angles is often difficult. A 5 rating will ensure protection from any type of rainfall.

Higher ratings still exist for a reason. Devices that operate near standing water may be at risk of submersion, and this is when the 7 rating comes into play. Let’s compare two real devices to clarify. The Axiomtek GOT812 is an industrial panel with an IP66 rating. It’s great for any outdoor use that isn’t in danger of submersion.

The Axiomtek GOT815 is its upgraded cousin. While the computers pack nearly identical hardware and performance specifications, the GOT815 is IP69k rated. This makes it safe in the face of extreme pressure and high temperature sprays, but it comes with a noticeably higher price tag. With a stainless steel enclosure, it also weighs almost a full kilogram more, making it less versatile in terms of where it can be placed.

A basic understanding of IP ratings should help you make informed decisions when you buy electronics, but there still may be times of uncertainty. It is always ok to consult specialists and verify that you are getting the right level of protection. After all, under protecting and overpaying are both worth avoiding if the cost is only a simple conversation.  Contact Westward Sales to learn more about IP rated networking and computing hardware for your project.

Get the networking know-how you need. Learn about Power-over-Ethernet, switch management, wireless, heavy industrial applications, new technologies and more. Join 1000s of others and subscribe to our blog now!