How to Improve Cell Service with a Signal Booster 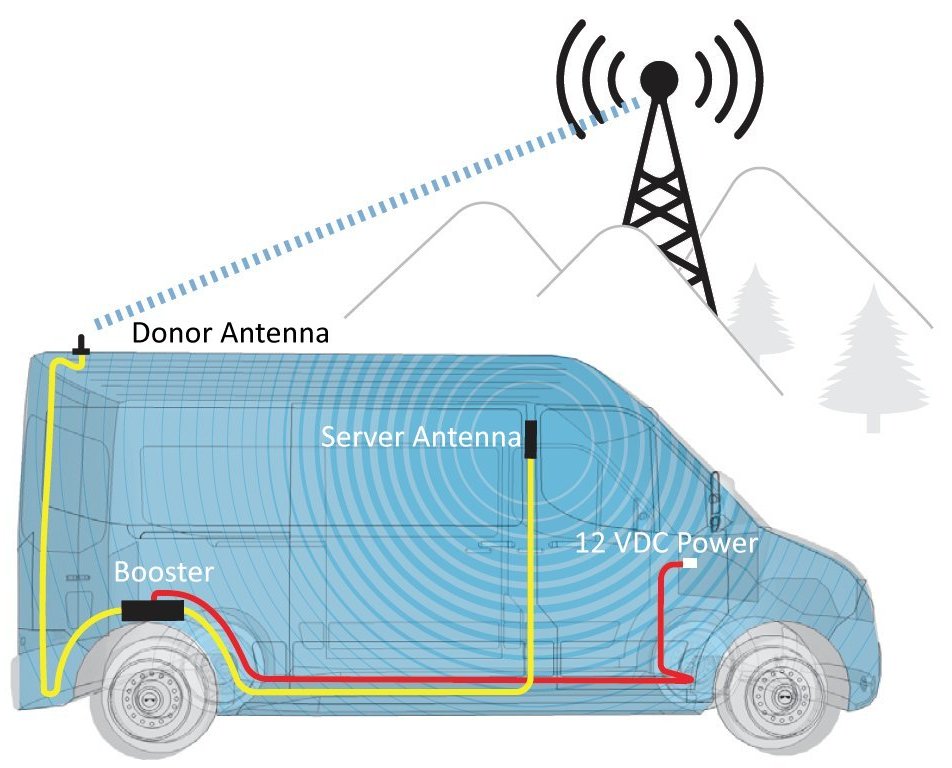 The Pew Research Center conducted a study in February 2019 to determine who in the U.S. uses a cell phone. Not surprisingly, they discovered that 96 percent of Americans use some kind of cell phone. With cell phones in the purse or pocket of nearly everyone, people today take cellular communication for granted. Until that is, they cannot get reliable service — a problem that people using landline phones rarely experience. Low signal strength in the service area is the most common reason for poor reception. Fortunately, signal boosters solve that problem and restore solid, reliable communication. Let’s look at how they work and how you can tell if a booster will help.

Cell phones, much like those walkie-talkies children love to play with, contain both a radio transmitter and a radio receiver. Unlike walkie-talkies, though, cell phones don’t talk directly to one another. They communicate via a network of cell phone towers. Each tower sends out a continuous radio signal, which cell phones automatically connect to. That signal can vary in strength depending largely on how far your phone is from the nearest tower and whether there’s a clear line of sight between your phone and that tower.

Why Signal Boosters Are Needed

Cell phones, much like those walkie-talkies children love to play with, contain both a radio transmitter and a radio receiver. Unlike walkie-talkies, though, cell phones don’t talk directly to one another. They communicate via a network of cell phone towers. Each tower sends out a continuous radio signal, which cell phones automatically connect to. That signal can vary in strength depending largely on how far your phone is from the nearest tower and whether there’s a clear line of sight between your phone and that tower.

For instance, major cities often have “urban canyons,” where skyscrapers dominate the landscape. Radio signals, even from a nearby tower, can be blocked by the density of buildings on both sides of the road, creating an environment at street level where cell tower signals can’t penetrate. Placing signal boosters at strategic locations can solve such problems.

How to Tell If a Booster Will Help

When the cell tower signal isn’t strong enough at a given location, the reception becomes spotty. Calls are dropped. You may hear the other party, but they may not hear you. These and similar problems at your home or office can often be solved with a signal booster.

What Is a Booster?

A signal booster consists of three components (server antenna, cellular booster, and donor antenna) and the cables that connect them.

First, an exterior antenna captures the signal from the nearby cell tower, where “nearby” generally means anything from less than a mile to as much as 20 miles in rural areas. This antenna is normally mounted outside the building or vehicle and is known as a donor antenna. By the way, the donor antenna for a fixed location is directional, which means it is designed to focus on the cell tower. By focusing, it captures more energy from the cell tower than a non-directional or omnidirectional antenna would. This characteristic is known as “gain.”  Mobile applications require an omnidirectional donor antenna, which offers slightly less gain.

Next, a signal amplifier boosts the strength of those radio signals.

And finally, the signal amplifier sends the now-stronger signal to a server or rebroadcast antenna. It’s mounted within your office, home, vehicle interior, or where reception is poor. With the signal booster in place, your cell phone now “talks to” that indoor “server” antenna instead of relying on the cell tower’s raw signal. The net result: The booster system increases signal strength throughout your premises, while the cell tower receives a focused, stronger signal than your phone alone can produce. It eliminates dead zones, dropped calls, poor signal quality, and reduced data throughput rates.

Signal Amplifiers for Every Situation

Signal boosters can deliver trouble-free connectivity for homes, offices, and even for mobile users.

When workers in the field need to stay in touch with distant team members, the Cel-FI GO eliminates dropped calls and low cellular coverage in congested or remote areas. Because the donor antenna, amplifier, and server antenna are all packaged in a single chassis, there’s no need for cabling shown in the figure above. Further, the included app (Android and IOS) displays signal strength along with real-time data and performance metrics to keep you informed of device status. You can also register your Cel-FI GO through the app, download firmware updates, and troubleshoot if needed.

While you can use this booster in a building, it works as well for mobile applications — automotive, trucking, RVs, boats, and marine vessels. Setup is easy; it takes about 5-minutes, and anyone can install the unit. No special tools or knowledge are required. You simply plug the booster into power, whether it’s 120 VAC or 12 VDC. And rest assured, Westward Sales value-added service configures the system to your precise specifications.

But If You’re Not Mobile…

The Cel-FI DUO+ and Cel-FI PRO boosters are designed for homes, offices, small businesses, and other indoor environments. These units each consist of two chassis that communicate with one another wirelessly. One chassis contains the donor antenna while the other rebroadcasts the amplified signal throughout the premises. Because communication between the two is wireless, installation is quick and easy; there’s no coax to pull. You can begin enjoying a more substantial, more reliable cell service almost immediately.

The Westward Sales technical staff is standing by to answer your questions about signal boosters, so be sure to contact us should you need help or further information.