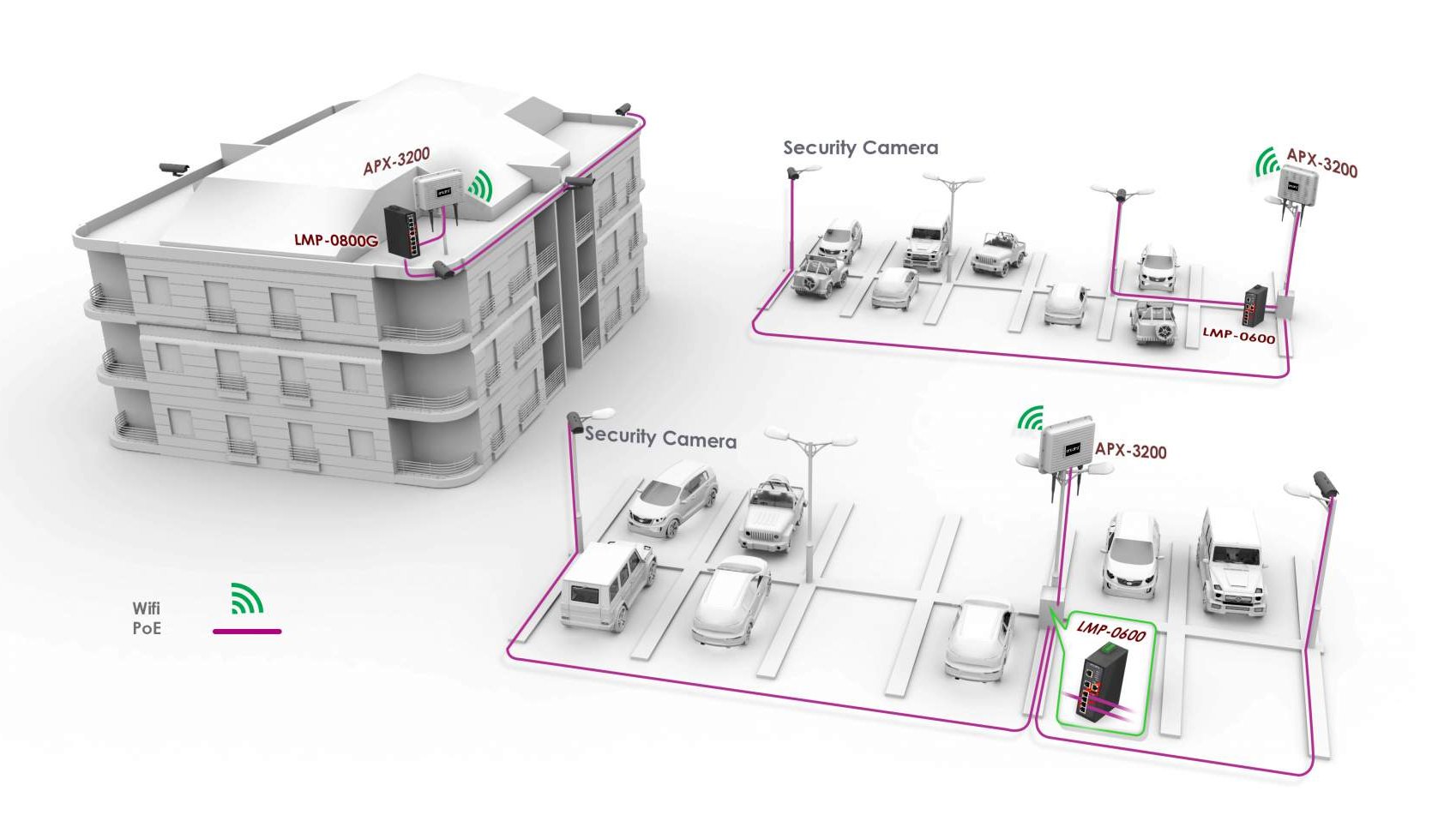 Video surveillance is vital for businesses and public spaces. Building a remote outdoor surveillance system presents significant challenges, especially one that is off-grid and requires wireless communication. How will your video be recorded and accessed? How will you power the cameras? Which cameras should be used? There are plenty of options to consider when installing cameras on a cellular or wireless local area network (WLAN). Three of the most significant issues to resolve are bandwidth, power, and security.

The main issue with remote video surveillance is bandwidth (the amount of data transmitted in a second). A Wi-Fi or cellular network will require the installation of IP cameras. They have many advantages — not least of which includes remote viewing from anywhere in the world — but like all things, those advantages come at a cost. As you plan your camera’s network, you’ll need to determine the actual (vs. theoretical) throughput of the system and compare it with the bandwidth needs of the cameras you deploy.

Each camera model has specific specifications, but we can use generalizations to help with early planning for outdoor surveillance. Four types of video feeds are common in security cameras: 1080p/30FPS, 4K, H.264, and MJPEG. Frame rates and internal features determine the exact bandwidth needs for each feed. General rates per video feed are as follows: a 1080p camera recording 30 frames per second will upload 2 Mbps; a 4K feed requires 4 Mbps; an H.264 feed requires 8 Mbps; an MJPEG feed will utilize 24 Mbps.

The theoretical maximum Wi-Fi speed is rated according to a Wi-Fi standard. The common 802.11ac standard will soon be replaced with the 802.11ax (also known as Wi-Fi 6). Introduced in 2019, it offers the fastest performance. The actual performance of Wi-Fi networks is much less than the theoretical maximum published in product data sheets. It will depend on several factors such as overhead, interference from objects and other radios, distance, number of simultaneous connections, antennas, and security protocol layers. The IP layer of Wi-Fi is typically 50 percent of the air link theoretical rate. Plan your network based on actual speeds below.

The number of cameras that can run on a single segment of a Wi-Fi network will vary widely. Assuming you have 200 Mbps of available upload using an IEEE 802.11ac compatible access point like the ARS-7231-AC, you might be able to connect one hundred (100) HD cameras, fifty (50) 4K cameras, twenty-five (25) H.264 cameras, or eight (8) MJPEG cameras. Keep in mind that some access points limit the number of clients connected to a single SSID instance. Knowing a few bandwidth numbers ahead of time can streamline your decision process and help you budget accordingly.

In places where Wi-Fi or Ethernet is not available or too expensive, cellular streaming may be the only way to go. However, live streaming over a cellular connection is tricky because it is less reliable. Cellular signal strength degrades or fluctuates due to congestion (lots of people connected to the tower at once), weather, and physical obstacles (think tree foliage). When a live stream is interrupted, data frames are lost. You simply have less control compare to a WLAN.

There are effectively four classes of LTE, Category (Cat) 4, 6, 12, and 18, commonly available in an industrial cellular router. This table shows the theoretical limits of upload and download speeds. Like Wi-Fi, the limits on the number of cameras that can connect to a router and communicate over a cellular network will vary. Carrier aggregation, distance, antenna type, and the mobile operator can effectively improve performance.

With cameras, upload speed is a primary concern. Assuming you have 100 Mbps of available upload on a Cat 12 router, you might connect twenty-five (25) HD cameras, twelve (12) 4K cameras, six (6) H.264 cameras, or two (2) MJPEG cameras on one network.

Security cameras are evolving quickly. Video feeds are moving to higher definitions and beyond, making it exciting technology. Regular visual feeds and infrared feeds for low-light scenarios are available. Cameras are not only equipped with pan, tilt, zoom, but they also feature heaters, wipers, LED lights, and computation. Cameras draw more power when these features are initiated. That increased draw can be as much as 2 watts each, which requires additional output from your power source. Cycling these features one camera at a time can help with manage load limitations. Power consumption may not be an issue with on-grid operations with a dedicated power line, but it is a real concern for remote, off-grid systems that rely on batteries charged from a solar array. Whether it is an AC or battery source, power is typically distributed to cameras over a Power over Ethernet (PoE) network.

PoE++ is the current standard with the highest power available. You can get up to 60 watts out of a single PoE++ switch port (the rugged LNP-0500G-BT is a popular PoE switch for many applications). High-definition cameras have a wide range of power needs, but they typically require from 2 to 10 watts per device (10 watts using extra features). The math is simple. If you wish to connect multiple cameras to a PoE switch, dedicate one camera per PoE port depending on the switch capacity. Cameras less than 15 watts are suited for IEEE 803.3af compliant PoE switches. IEEE 803.3at compliant PoE+ switches accommodate cameras up to 30 watts. IEEE 803.3bt compliant PoE++ switches provide up to 60 watts (Type 3) and 100 watts (Type 4) to the latest power-hungry cameras over a single Ethernet port. Sum the watts for all cameras and make sure it is less than the total power output of the switch. Some PoE++ switches split the power over several Ethernet ports. The LNP-0800-60-24 8-port PoE++ switch outputs 60 watts over four (4) ports and 30 watts over the other four (4) ports. A total of 250 watts at 24 VDC is available. Using this switch, connect up to eight cameras so long as the total power draw is less than 250 watts. If you enable every bell and whistle on each high-powered camera, you might be looking at around 3 to 4 cameras per PoE++ switch. This much power requires a large solar power kit if it operates 24×7.

The final point on power consumption is video recording. The DVR (or other video storage device) will draw much more power than the cameras, which means it needs a separate power solution that may require an additional 60 watts or more for your recording station. Fortunately, new camera models bypass the DVR and provide compressed video stored on the camera for up to 365 days.

Digital security is a broad, important topic with many approaches. Ultimately, you need a secure upload from the cameras and secure data storage, wherever that may be. Wi-Fi routers and access points offer encryption, and the carrier encrypts LTE signals, but IP cameras do not necessarily encrypt the data they upload. This lack is a potential vulnerability if the cameras are wirelessly transmitting to a router or access point. The best solution is to purchase cameras that include encryption, or wire the cameras to a router and use the router’s security features to protect the data. As for video storage, many measures need to be in place, but one of the most overlooked issues is authentication and access. Often, the greatest security exposure in a network is from the people who have access to it. Taking extra measures to ensure that only the right users are authenticated to access video storage is arguably the most critical step in security. It’s a simple concept but often overlooked.

This overview only offers broad considerations for your wireless camera network. After you select a set of devices to serve your needs best, you’ll need to measure the finer details to implement a solution that gets the job done efficiently and affordably.